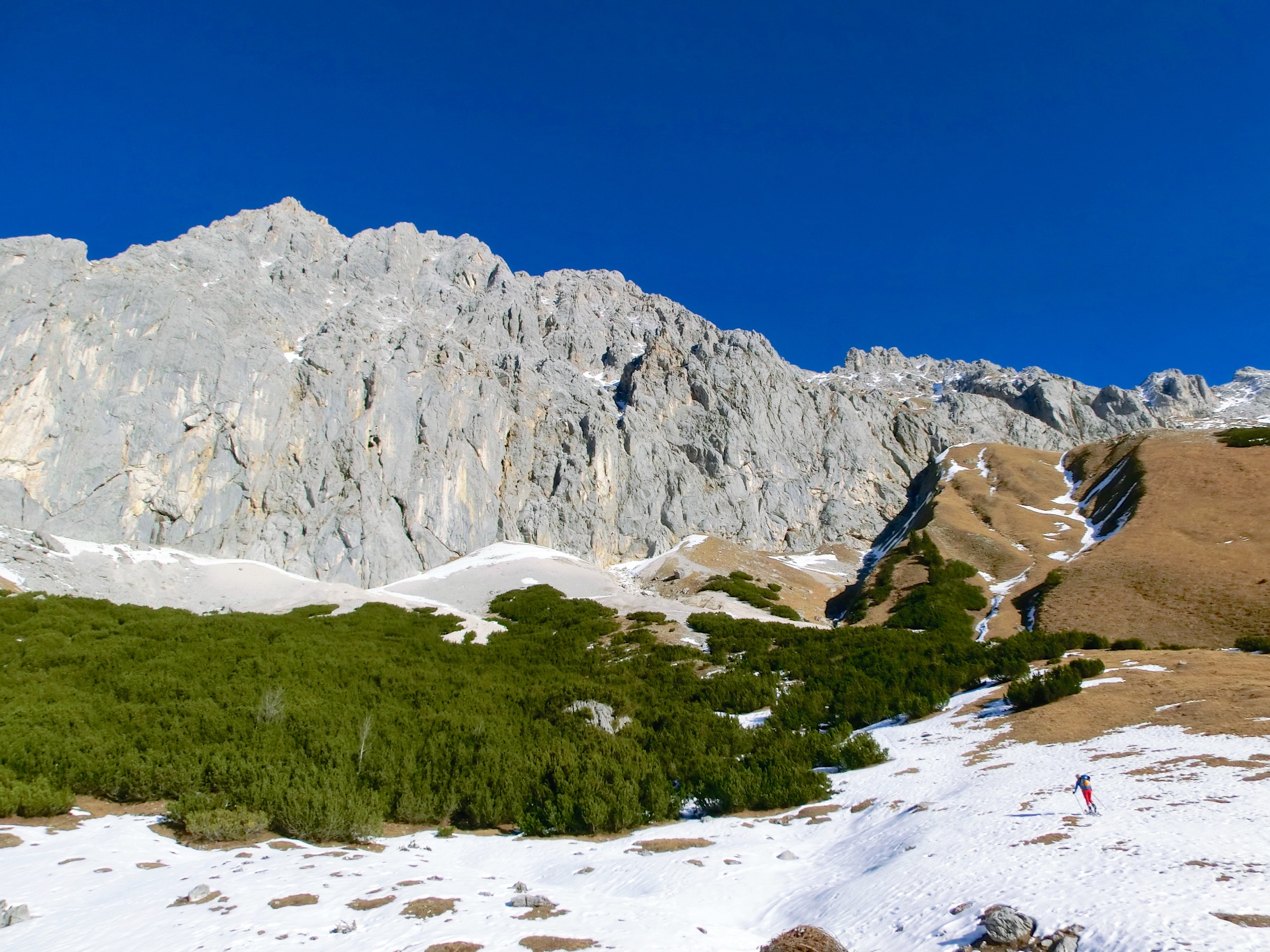 Well yea, a bit rough for a title I reckon, but hey, how to better deal with a winter situation that clearly decided to do without much white, thus far? Exactly: Either, stay home and cry a little or go out and climb a little. Or, a little much, if you really mean it.

Autumn and the young winter 2015/16 has not blessed the eastern Alps with a lot of snow, barely anything to be precise, but to make up for it, with pretty much perfect climbing conditions. The same was true for much of the recent years as well, but in a way, this season topped it all off: The last days of a dying twothousandfifteen saw almost 15 degrees (Celsius! plus!) and cloudless sunshine for weeks (in Tirol, that is). Can’t be global warming, could it? Well … here’s some action:

Situated at the far right end in this endless sea of rock, Da Capo takes a beautiful line in 7 pitches, starting off with an almost impossible slab start (6+?!). Best of all weather, best of all rock, what a place! The climbs around Wermeteigen Alm are more than just idyllic, they are ridiculously idyllic. This was on the last day of October, and doing an out-of-this-world pumpy 40m 7a baseclimb at the seemingly forgotten crag in the last of this days sun rays and almost collapsing from overheating, well, this was a clear sign that there might be something slightly “wrong” with the weather this season.

One more on the list. It is always special to climb a route set up by your dad and dedicated to you mum, there are not too many of those routes around. 1991 that was, Schöpf/Knabl. Back in the day, Mon Cheri was among the first fully bolted routes in this area, quite a thing. 15 years later, we take this perfect October day to repeat it in style, what a climb! 7 pitches of continuous tricky climbing, starting off with the crux pitch testing all your on-sighting skills. Finally done!

still “approach”. or, free solo up to here.

repelling: got a little late this time.

Alex: „Let’s do something really alpine.“ Me: „Well, alright.“ Yea, almost the famous last words. We can now quite confidently claim that this route did not see many repeats in the last 37 years. First ascent: 1978, graded 6+, one of the test-peaces of free climbing. Normally, this grade is an easy warm-up for us, but up here, it proved to be our very limit. Mentally and physically. The first crux is to actually get to the start of the route („100 m Schrofen“ my ass), about 200 m of free soloing through questionable terrain you finally reach the route, and it proves to be all but easy. Almost without fixed protection, besides a (very) few rusty pitons and slings, the climbing took a lot longer than we thought, and it was a lot harder than we thought; finishing off with a 6- offwidth crack; never been so thankful for seconding a pitch! Well, and then this was of course in December, and days in December tend to be short. Of course, getting down that thing was the second half of this story, and thank the spaghetti monster that we had both headlamps. What followed was a highly sketchy repel / downclimb action on properly aged gear, and let me say that, quite out of my comfort zone. Well: alpine we wanted; alpine we got.

Another project, long on the list: Skitour -> climb -> ski. Finally made possible this year on the south faces of the Plattenspitzen, touring up from Ehrwald. A (to me) new and beautiful area with lots of base climbs as well. The route we chose, Das Schweigen der Hämmer, well lets say that the 5c’s are definitely 6b’s and the 6c+ is … hard. Very fragile slab climbing on mini-holds, and as this was December as well, we repelled after pitch 5 for the day was deciding to end, slowly.

One last alpine climb end of December, still in t-shirt, still at 1.500 m. Back to the good old Steinplatte, the conditions are incredible, and we choose to go for a mix of few tours on the Akkupfeiler. Beautiful rock as always, beautiful day as so often. Good times out! Topping out into a skiing area where people are actually skiing is something quite surreal, but well, everyone follows his or her passions. We chose rock!

So much for the longer routes. There as been an awful lot of great sport climbing, too, but what do you want to blog about that? That’s just always cool, and that’s it. So much for the alpine autumn and early winter, and now it’s all waiting for snow. It’ll come, it always does. Thus far.